The event was such a success! 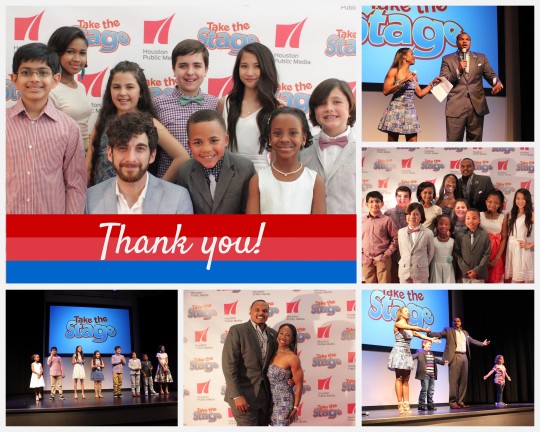 We had a really wonderful event on April 7th!  The kids stole the show with their charming personalities, as per usual, but they were definitely rivaled this time by our truly amazing co-hosts, Lauren Anderson and Chester Pitts.

If y’all don’t know,  we’re lucky these two stars joined us and support Take the Stage!

Lauren Anderson is  the  first African American ballerina to become a principal for a major dance company.  She danced around the world and with the Houston Ballet from 1983-2006, and well, she even performed this year in 2016 in Sleeping Beauty.  In 2007, Ms. Anderson assumed her new role of outreach associate in Houston Ballet’s education department where she teaches ballet classes at Houston Ballet’s Ben Stevenson Academy, conducts master classes at area schools, and lectures to students on dance and her historic career as one of America’s most distinguished African-American ballerinas.   She is  charismatic, fun and a beyond  talented  artist who is just wonderful with children.  More here.

And, Chester Pitts, as you may have seen, was in our “how-to saute” video with Andrew Murphy and Patrick Beverley.   You may now see him frequently on the news as a sportscaster for KPRC.  Chester Pitts was drafted by the newly formed Houston Texans in the 2nd round of the 2002 NFL Draft, becoming an original member of the Texans franchise. During his time with the Texans he started every game he played – the first player in the team’s history to accomplish this.  Like Lauren, Chester is also now very devoted to giving back to the community helping youth and promoting the arts.   More here.

And, here are a couple moments from the evening:

Posted by danjgordon in Uncategorized